Meanwood Road – Your Road, My Street

In the book The Ongoing Moment Geoff Dyer asks an intriguing question. What is the difference between a road and a street?

“It is not a question of size (some urban streets are wider than country roads). A road heads out of town, while a street stays there, so you find roads in the country but not streets. If a street leads to a road, you are heading out of town. If a road turns into street, you are heading into town. Keep on it long enough and a road will turn into a street but not necessarily vice versa (a street can be an end in itself). Streets must have houses on either side of them to be streets. The best streets urge you to stay; the road is an endless incentive to leave.” Geoff Dyer, The Ongoing Moment. 2005, p 262-3

This is a map of Meanwood Road, which heads north out of Leeds. Roads slice up the city, separating the urban sprawl into different geographical areas, whilst simultaneously joining up one part with another. This road is no exception. For many it is simply seen as a means of getting from one place to another; a liminal space where cars have taken priority over people in a continual flow of traffic. Drivers look straight ahead, day and night, as they travel up and down it. But this road is also a street; it has houses on both sides. People live here. Cars are reverse-parked outside homes – much to the outrage of some commuters who have to stop; interrupted – while behind the morning rush hour, horses, deer and sheep can be seen on either side of Meanwood Beck, as it flows across the valley floor and filters into the city, uninterrupted and often unseen.

The map is a collaboration between photographer Lizzie Coombes, geographer Dr. David Dawson and 365LeedsStories’ Matthew Bellwood. Lizzie and David live at either end of Meanwood Road. The road, which is congested at rush hour and can suffer excessive speeding the rest of the time, has no cameras, and no structures in place to slow the traffic.

The idea for this project came from a road rage incident when Lizzie was parking her car outside her house. Another car was forced to stop and wait – much to the annoyance of the driver – and choice words were exchanged. At first, Lizzie was annoyed. Couldn’t the motorist see the houses? Couldn’t they see that they were on a street with houses on both sides? Couldn’t they see that people lived on the road and appreciate its human value? But then she started to think a little harder… Of course, for many, the road is an important part of their daily commute. It’s hard to appreciate the beauty of a place, when you’re stuck in traffic or late for work… Surely there must be a way to make the road a safer and more pleasant place for residents, businesses, and commuters, be they in a car, on a bike, on the bus or on foot?

In response to this question, Lizzie has been taking photographs in and around Meanwood Road for the last three years in an effort to reveal its beauty, its history and humanity. Meanwhile, David has been collecting geographical data and information on the road and its surroundings that reveal a wealth of hidden facts and values. Alongside this, Matthew has been collecting stories from local people about their memories and experiences of the road as well as creating poetry from numerous walks up and down the length of it.

The result of the project is an alternative map of Meanwood Road that we hope starts to tell the story of the roads’ value beyond it being a means of getting from A to B. We hope it may provoke some interesting conversations and encourage people to think about the road in a different way. In doing so, perhaps it may act as a signpost towards future design initiatives – positive interventions in traffic and infrastructure that slow cars down; that get commuters to look left and right instead of straight ahead; that humanise the road and turn it back into a street.

This initiative was supported by the Infrastructure BUsiness models, valuation and Innovation for Local Delivery (iBUILD) project (Grant no: EP/K012398/1) and Tipping Point, and by the Leverhulme Trust (Grant no: ECF/2014/144).

The stories on the map were gathered at Meanwood Fun Day 2016, with the exception of those from Pages From My Meanwood Scrapbook by Jean Barker and Doreen Wood which have been reprinted by kind permission of the authors.

Traffic and road statistics based on available data collected by Dr David Dawson.

Thanks to: Jean Barker, Ross Horsley, Patsy Lyttle, Doreen Wood, Behzad Eftekhary and everyone who has spent time and talked with us along the way…

53) 22nd February
The golden honey of the early morning sun warms the belly of a rabbit, both inside and out, as it lies on the grass at the road’s edge.

The alternative map of Meanwood Road is available in full as a folded A4 document – if you would like a physical copy, please feel free to contact us at: info@365leedsstories.org

Lizzie Coombes is a photographer with a long track record of documentary, portrait, events, theatre, and publicity work, educational workshops and cross artform collaborations. You can follow her work on Instagram and Twitter.

Matthew Bellwood is a writer and storyteller based in Leeds, with a particular interest in interdisciplinary collaboration. You can see more of his work about Leeds here at 365leedsstories.org

David Dawson is a Leverhulme-funded Early Career Researcher at the School of Civil Engineering, University of Leeds.

Document design and map by Amy Levene, a freelance designer and illustrator from Leeds – wingfinger.co.uk

You can get in touch with the team by emailing: youroadmystreet@gmail.com

A full set of photographs taken on Meanwood Road by Lizzie can be viewed on Flickr.

An alternative map of Meanwood Road 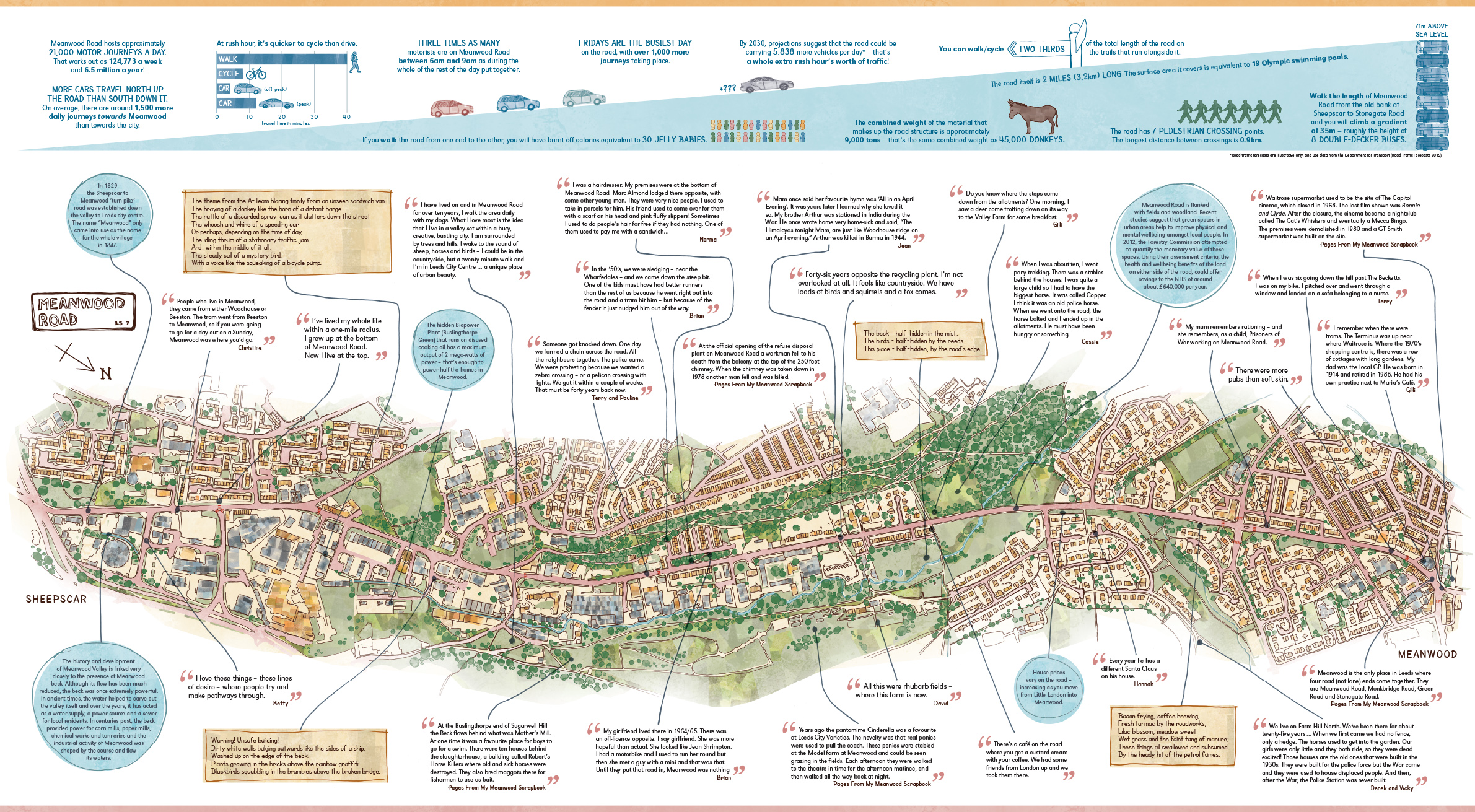 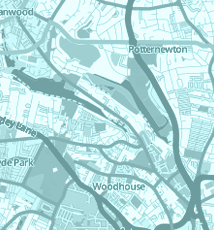 Since Autumn 2013, Alison Andrews and Matthew Bellwood are working with people from all over Leeds to create a series of maps of the city.

These will be produced in collaboration with a range of other artists. Maps will be sung, embroidered, floated down rivers, fixed on to buses and rendered as shadows. Each map will show the city from a different perspective.